When I was fifteen, my father re-enlisted in a war I didn’t know he had been fighting. He wanted to move back to the north side, he said. Back to the steeple of St. Anthony’s, to the brick ovens at Rossi’s Pizza, to tomato vines climbing plywood stakes in five gallon buckets, line-dried laundry, and cast iron balconies with fat geraniums blooming over their sides. Back to the last place he and my mother were happy. After twelve years on the second-floor of my aunt’s house on South Loder Avenue—a dark, collapsing bunker that made him feel safe, invisible to the enemy of his shame—he wanted to go back where he belonged, and live in the light of what actually happened.

It was after midnight, but we crept over to his new apartment on Murphy Avenue armed with flashlights. The previous tenants were gone, the electricity shut off, but my father couldn’t wait to show me. He had an urgency about him, nervous as we pulled into the driveway, his eyes steely under the streetlights. Not one to reveal his purpose right away, my father claimed he was getting this duplex for us, a bigger place so I could spend the night more comfortably, maybe even stay with him on the weekends if I wanted. 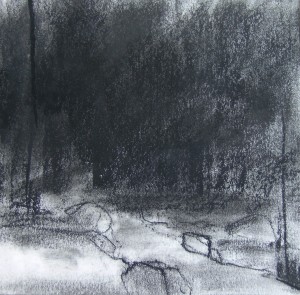 I was sick of duplexes, but this one had sunny yellow siding and shared a street with the Catholic school I always wished I attended, except that I was raised by my mother and her Presbyterian side, owning no plaid skirts. My father and I tiptoed in the dark, inspected the rooms. Walls with drawers built right into them. Carpet that squeaked with newness. A garbage disposal. We opened cupboards and searched out light switches and walked the floor plan over and over, imagining our lives.

I liked the kitchen best. It had one of those islands that gave the room a modern feel, and a built-in dining area that also made it look cozy and studio-ish. But my favorite part was the picture window—one whole wall that overlooked the neighborhood, every brimming backyard to Squires Avenue, a cluster of maples on Oak Hill, and a triangular hunk of sky pricked with faint suburban stars.

My father and I stood at the window. “The Ligouris live there,” he said, pointing next door. “And the Trottis are down the block. And just past St. Anthony’s there, you can see the place your mother and I lived in when we first got married.”

My mother showed me that apartment once, one night in the car after errands, her cigarette dangling out the open window. “There it is,” she said, slowing. That was the apartment she had loved, the apartment that got away. Her whole face changed as she looked, the muscles around her mouth relaxing. This is the north side, where parish bells ring on Wednesday and Saturday evenings, and people chat on their front porches sipping beer or grappa or iced tea. But my father didn’t love it like my mother, not then. He didn’t love his neighbors stopping by unannounced. He didn’t love church hymns competing with his football games. Most of all, he didn’t love the permanence, how nobody painted their house a new color or cooked anything their grandmothers didn’t make, and how all that sameness made him feel restless for the first and only time in his life, a time that now feels like it belonged to someone else, someone who could conceive of a different life as my father now cannot. After a year, he insisted they move, and that’s how I came to grow up on the west side. My mother never embraced the change. She missed the smells of her neighbors’ kitchens, baking dough and red sauce bubbling on gas stoves. She missed her porch, her plum tomatoes lolling on the vine in her buckets, her impatients hanging from thick brass hooks. She missed Italian families shouting to each other across their yards because, though my mother was not Italian, their invasive, good-natured ways tempered some of the loneliness of my father’s nights at the bar.

So they moved, and then they divorced. I don’t know if my parents ever made a connection between leaving the north side and the end of their marriage, but that night, my father stared out the window at their old neighborhood, the tip of his cigarette burning an orange hole in the blue dark, and he seemed to know something he couldn’t tell me about why we were here. My romanticism tries to explain his return as an attempt to regain some part of my mother, practiced as I am at making his every decision revolve around the loss of her. But it’s possible my father returned hoping to regain a part of himself, too, a part that once chased after happiness.

We turned off our flashlights and drove back to his south side apartment above my aunt, where the porch sagged like a basket two stories above the sidewalk, where paint peeled off the bathroom walls in moldy curlicues, and the burnt orange carpet was covered in dark stains. My father’s clothes lay piled on the bedroom floor in two gigantic heaps, one clean, one dirty, and his kitchen smelled of the stagnant water that had collected in the clogged sink.

He brought a two-liter of grape soda into the living room, and we did what we always did when my father returned to the battle in his head—we turned on the History Channel, watched war documentaries. Gallipoli, D-Day, the 101st Airborne, the 502nd Parachute Infantry, war correspondents like I.F. Stone and Dickie Chappelle. Then The Longest Day came on, with a young John Wayne and Robert Mitchum, playing until almost three a.m. Our favorite movie. I love the black-and-white account of the Allied invasion at Normandy—the paratroopers’ doomed leaps over St. Mere-Eglise, the uncolorized blood on Omaha beach, the sweeping of hysterical French women into soldiers’ arms on V-E Day, the roses with which the women shower the Allies on the streets of Paris. 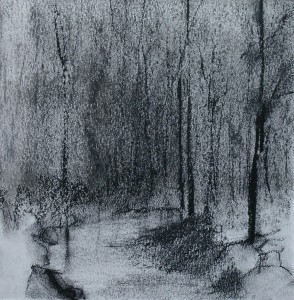 My mother once told me that she left my father because she could. She said it defiantly, emphasizing something about her rights, about what she and other women had earned by 1984. I always imagine it was someone who lived through the sexual revolution that coined the comparison of divorce to a war. A breaking point broken, a series of battles, a dark celebration of untangling oneself from a colonizing power at the end, while the casualties (couches, wedding china, children) are tolled. My first memory is of my parents fighting, the only memory I have of when they were married. I was two years old, and I crawled out of my crib when I heard the yelling. I crouched in the hallway until my father hucked a glass ashtray across the room. It was heavy and didn’t break, but I heard it thud on the carpet, and I ran into the room and threw myself facedown on the brown argyle couch. How I knew it was the end none of us knows, but we all remember how I shrieked into the cushions, “I want to live with Mom, I want to live with Mom!”

My father hid from Vietnam in a bar in the Catskill Mountains, and my mother told me that when she asked for a divorce, he didn’t fight then either. He seemed resigned, she said, to the fact that it was over between them, and their divorce proceedings went without a single hostile incident. “Divorced kids,” like me, carry with them a certain kind of curiosity about their role in the fighting—we hope we weren’t the cause, and yet, somehow, we hope we were, that we were important at a time when our parents seemed consumed with themselves, with winning. Through the years, I’ve asked many questions, and my mother has answered them without sparing me. He cheated. He drank. He never cleaned the house. Perhaps she knew that the truth takes a long time to embed itself in the heart, become part of it and stop hurting, like a bit of shrapnel. But I always wondered why my father never fought for custody of me, for his family.

As we watched The Longest Day, my father explained things. “You know what kind of plane that is?” he said, knowing I didn’t. Then he launched into one of his lectures—the country that made it, how it worked, how it affected the entire outcome of the war. If he didn’t own a bar, my father could have taught high school social studies, made a living off the history he knows so well, the way regulars listen to him, captivated as students, when he tells them about war. After giving up his marriage and his child, perhaps my father feels least like a failure when he has something to teach.

Years later, in college, I would read Susan Sontag’s Regarding the Pain of Others, and think of my father. In a passage about the art that came of the Spanish Civil war—battle scenes etched in wood, grainy photographs of buildings so damaged they looked like boulders chipped with axes—Sontag wrote, “But the landscape of devastation is still a landscape. There is beauty in ruins.” Just as there was beauty in my father’s fallen face as he looked out at the north side in the moonlight that night, in all of us returning, in our own ways, to the old battle sites. Maybe my father didn’t really know what pulled him back there. Maybe it was the only place that could explain his sadness. Like the mind of a veteran, grinding his teeth to nubs in the night, my father may have believed returning to the ruins of his marriage would bring him penance, and finally, peace.

On our respective couches—his the full-sized one, mine the cramped loveseat with my baby blanket draped over the back, taken the day my mother threw him out for the last time—we twirled spaghetti on plastic forks and recited the movie’s last lines:

I wonder who won.

Amy Monticello received her MFA in nonfiction from The Ohio State University. Her work has been previously published in The Rambler, Redivider, Prick of the Spindle, Upstreet, Waccamaw, and elsewhere. She currently teaches writing at Ithaca College in Ithaca, New York.