Behind Rapture: An Interview with Mary Jo Amani 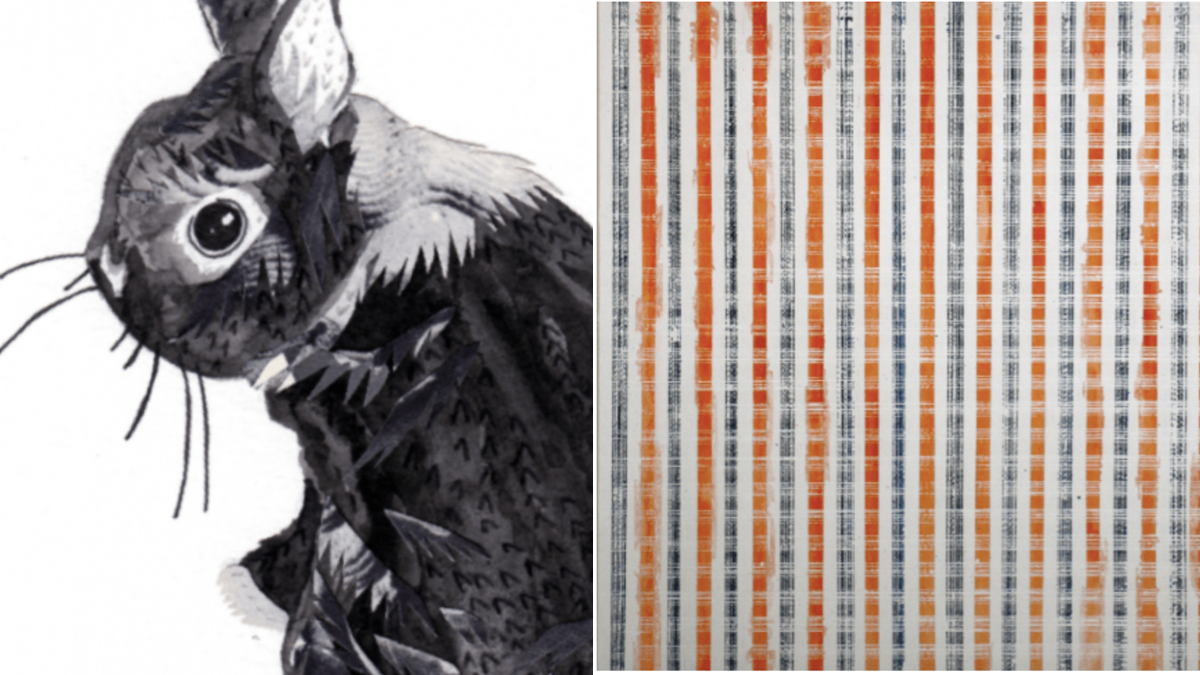 Mary Jo Amani’s ecstatic poem “Rapture” remained with me long after my initial reading. I was so grateful to be able to share this powerful poem with our readers in issue 49.2. Recently, I was able to ask Mary Jo a few questions about the process behind “Rapture,” and she was gracious enough to share the story behind this poem with us.

MT: As a reader, I am interested in the tapestry effect this poem creates for me. There are so many threads and I’m enchanted by the way they hang together through the different sections. What was your process like writing this poem? Where did it begin?

MJA: The initial concept or thrust of a poem comes quickly for me because my work is heavily autobiographical and I’m a highly narrative poet—so there is endless material to mine from my own life. Several sections of this poem come from previous work that ultimately didn’t hang together, individually or as a collection, but whose concrete images and themes kept circling around in my writing.

“Rapture” unfolded in a burst of recognition, when the consistent thread of spiritual longing in the speaker’s life became evident. I wanted to capture the arc of that exploration over a lifetime and share the core influences that helped explain the speaker’s search through formal religious/spiritual/philosophical orientations like Catholicism, Pentacostalism, Existentialism, literature, and Buddhism.

I don’t think I could have written this poem without the ten years I took, after a midlife crisis, to explore the core of this longing, and certainly how it was at odds with the way my parents and most of my family embraced the world. Such an inclination to seek spiritual understanding as an essential part of one’s existence, brings with it a constant self-judgment about not achieving it, and the last section, I hope, captures the speaker’s lingering doubts, while she remains open and inclined toward a sense of wonder and joy.

Because the poem is autobiographical, the events are sequential, even while there is an attempt to keep them timeless. There’s an arc of growth here, too – from early childhood, to adolescence, to adulthood. Specificity was imperative to ensure the reader can identify with the speaker, with the flesh and bones of her.

The thread of the speaker’s longing for something beyond herself, over a lifetime, made the idea of sections come together. Once that became clear, it was easier to edit, knowing each section had to convey some aspect of the thread through a gesture and that the sections had to build on one another. How that happened exactly, I don’t know. It’s part of the magic of writing poetry, I think. It makes me happy to hear it worked for you!

MT: This poem also clearly comes from research—maybe a lifetime of reading and experiences. You touch on childhood, adolescence, and saints’ lives, to name a few threads. How did your practice of reading lead you to this poem? Or how did your reading shape the poem in its final form?

MJA: This poem is highly autobiographical and my passion around books and reading has been lifelong, mostly the classics, along with biography and philosophy. My parents really did worry about that—wanting me to be “normal,” more social, a cheerleader-type like my mother (I don’t say this disparagingly—my mother is a delight! —but as a child, she didn’t get this part of me). The only poems I remember from my childhood, that remain vivid for me, were ballads like The Wreck of the Hesperus and The Highwayman, and The Creation by James Weldon Johnson—my first introduction to a personification of the divine and how simplicity of language does not mean a lack of mystery and power.

But I came to poetry with a passion quite late, after an intense personal crisis in my late forties, and it was through so-called spiritual poets (isn’t all poetry spiritual?) like, Rumi, Rilke, Kabir, Hafiz, Mary Oliver, Hopkins, and the psalmists, that I gained entrance to the current rich tapestry of poets and their works, supported by a late Masters in writing from Pacific University.

One of my favorite poems of all time is Stanley Kunitz’s Halley’s Comet, a poem which brings tears to my eyes every time I get to that line, “Look for me, Father, on the roof / of the red brick building / at the foot of Green Street.” I palpably feel that child’s sense of longing and awe, a powerful desire to know his physical father and hinting at how that’s connected with an adult longing for a spiritual Father (I might write that as Father/Mother), with a child-like grounding in the physical world. That tension in those few short lines strikes me to the heart and how to capture that childhood wonder with the longing behind it is at the heart of this poem.

And I can’t not mention the saints—I really did read about their lives as a child, quite religiously (no pun intended!), and wanted to capture the ecstatic experience, which I shared, through language. The saint that stands out above the others for me is St. Hildegaard of Bingen, an amazing woman in the 10th century. A nun who was a non-apologist for her own images (she saw God as female in a vision) and recognized a commitment to creativity as central to her faith—the greening she claims is the divine expressed in all of us. I think reading Hildegaard inspires me to honor whatever arrives on the page (to be revised later!).

The italicized section in “Rapture” comes from a favorite poem from Hafiz, this same recognition of our eternal search for meaning—our longing to dance with the divine, something greater than ourselves, and never quite sure if we’re doing it well, stumbling most of the time. But for Hildegaard, as for Hafiz, the suggestion is that it is allowing for one’s own creativity, “dancing” so to speak, to be in play, that is the highest praise. I wanted this poem to dance a bit.

MT: You mentioned that this poem began as a few different pieces of writing. When you pulled them together, how did you go about making decisions about ordering the sections in the poem? How did you find its ending? Its beginning?

MJA: Once I discovered the initial form, at least in terms of the initial sections in tercets that frame the work, I felt a need to let the poem loosen up from the narrative and the forward movement of the tercets—to capture the sense of the ecstatic that the speaker experiences (so difficult to do with language, I think). I’m not sure that need was conscious, rather, it was more operative in the way one edits a poem, the reading and rereading of a line or a phrase until the sense of what is working and what is not comes to light.

Certainly, Gerard Manley Hopkins’ poems were revelatory for me; his “sprung rhythm” captivated me along with using spacing, line length, and enjambment to obtain a sort of breathlessness that comes with “ecstatic” events—however one attributes the source. And I returned to tercets without realizing it at first but knowing they seemed to work, grounding the narrative in the concrete, with specifics of place and the physical.

However, I think all of this implies too much intention in employing different structure—because really, I think that playing with the form of the poem allowed it to reveal itself. Certainly, there was some fine-toothed editing, but generally, I surprise myself—and then realize, wow, that works! For example, the one-line section— “She read the works of the saints.”  I think that the single line section and its implications reverberate more than a list of saints would have or how their lives inspired the speaker.

When the sections became evident and when they were hovering around 13 or 14, I realized it would be fun to consider the 14 Stations of the Cross, such a key ritual in the Catholicism of my childhood, though I don’t think I would have held out for that if the poem hadn’t seemed to fit into that number of stanzas. And, ultimately, the poem is autobiographical and chronological, and the events outline what actually happened in my life; both inwardly and outwardly, I hope the poem captures the speaker as an existential, spiritual, and physical traveler, reflective of my own experiences. The last section brings all of it together— suggesting that the heart/soul and body are inseparable, that in the end, for the speaker, there was perhaps a loss of faith over her lifetime, but that wonder and a sense of mystery continues to assert itself.

MT: I’m also interested in your revision process, specifically in terms of your hyper-condensed language. Something I found so impactful about this poem is the diction: the language is precise, plain, at times almost scraped flat– “my father was God. He broke the contract / with a belt and I hated him.” Moments like this in the poem both manage to say so much and leave so much hanging in the white space between what is written. How did you achieve this tone?

MJA: I’m delighted you enjoyed the “hyper-condensed language,” and that it works for you and holds the poem together. It’s a hard task, I think, to imbed concrete images and metaphors that stand for something more universal, to build a specific sense of the speaker’s sensibilities—not just through thoughts but also through the physical. Much of my own spiritual work over the past decade or so has been around saying less, of recognizing my need to be heard, and how I can talk and talk, and in the process, lose the listener. For whatever reason, this poem, I think, celebrates this self-discovery. The specific concrete images were selected to convey key moments in my life that stand for something more generalized about the speaker’s struggle living in a world where her sensibilities weren’t always appreciated or understood, and of course, the wonder of finding her own complicity so she can let go of blaming others for her life—something that brings true joy in the grace of forgiving others, and oneself.

It’s often revelatory for me, over and over in my editing and revising of poems, to find how one core image, or an aggressively sliced line, can help a poem breathe while bringing a punch as well. I’m so glad it worked for you! If there was any intentionality, in the end, it was that through reading the poem as it unfolded, over and over, out loud to myself, I could sense the energy, the pauses, the silence. And when they weren’t obvious, to work on it, to try to capture the energy of of what I had actually experienced, inwardly, in real time over a lifetime. That’s part of the mystery of working with a poem, because it is by honoring the soul’s intention in the initial draft, that you can end up capturing something grander than the quotidian in the final draft, placing meticulous attention to each individual word and line—to the breath which is found in the spacing, in the stanza lengths, in the length of a line, in enjambment, and ultimately, in what is not said, circling around to silence. Others have called writing poetry a spiritual practice, and that certainly works for me. 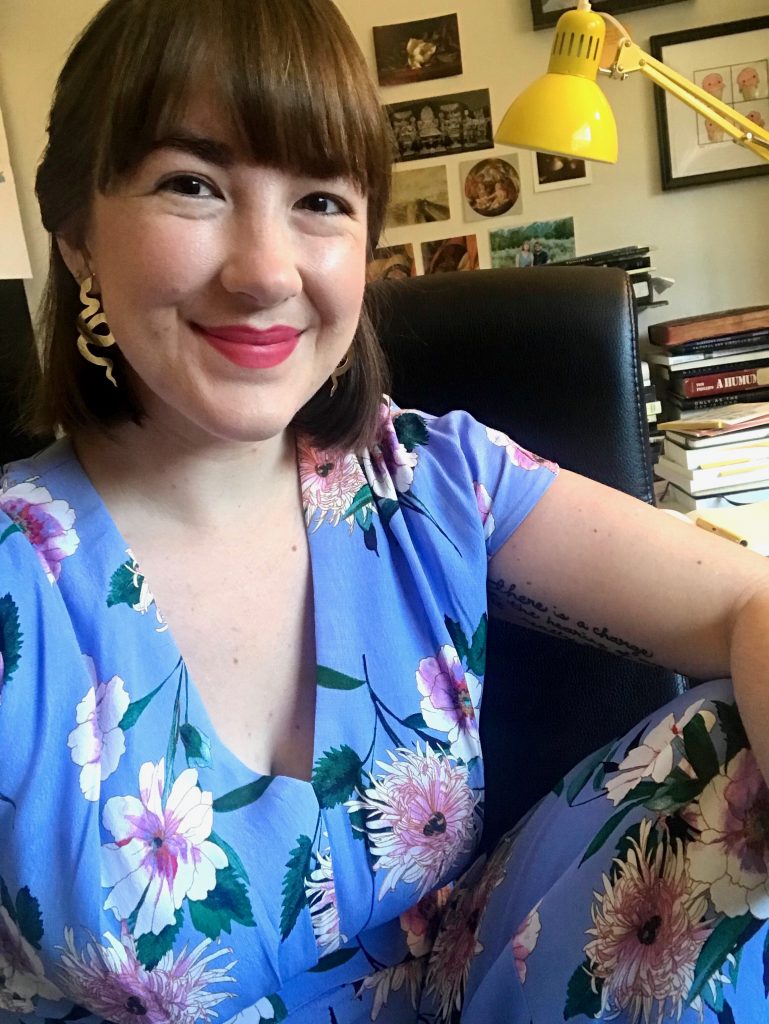 is an MFA poetry candidate at George Mason University. Her work has been published or is forthcoming in Sugar House Review, Rock & Sling, Cimarron Review, Ninth Letter, Juked, and elsewhere. She serves as the Assistant Editor for Best of the Net and Poetry Editor and Social Media Manager for Phoebe. You can find her on twitter.