We heave creaking Hefty bags over our backs. Bags the size of baby elephants, singed water heaters, stopped engine blocks worth only scrap. But we aren’t that tough. Bags of air, drips of dried syrup and spit. And aluminum, hidden shimmers of red, white and blue, and lime green. Ten cents a can in Michigan. We got your Cokes and Pepsis and Faygos, your smuggled Pabsts, and you won’t get them back. You kicked them down the bleachers by the second quarter when State took the lead. You jumped in the air and shrieked. We smoked Winstons on the tailgate of Murray’s F-150 and didn’t give a damn about your cheering, except for the hollow pings and pangs that followed. We bit our butts to the sound of sprinkling dimes.

Now we play the song of rescued treasure. Crinkle, groan, and crunch when we stuff our bags. A hundred shuffling cans full of air when we hike down the bleacher stairs. Dump them and stack them in the back of Murray’s rusted bed. Baby Trudy weighs two hundred pounds and isn’t a baby no more at ten and in a training bra. She jumps off the roof of the cab, belly-flops the Hefty bags so we can cram more. Her daddy, Two-Tooth Linus, is scared she’ll smack the rails, ruin her pretty face. That’s all she’s got to win a man since her body’s so big. Murray’s boy, Wilfred, tells him not to worry. Baby Trudy’ll make a fine bus driver or bull dyke. Hell, she could be the bus.

We rest syrup-stained palms on Linus’ bunched-up shoulders. Not worth another back-of-the-cruiser joyride. Wilfred is just a baby, even though he’s seventeen. Let him be a fool and Baby Trudy do her work. She pretends she’s having fun, dreams herself away, diving into a rich man’s swimming pool. Or maybe a fountain lined with coins, like she did last week, skimming enough coins to earn us a pizza and a case of Coke.

We turned those coins to food and we’ll turn these cans to coins. The money keeps on coming. Until the cleaning crew shows up. We know where they start, over on the west side bleachers, and we got there first. Half their job done for them. All those cans all gone. Just slogged paper cups and half-eaten hotdogs squishing under their sneakers. Poor students and Latinos working the cleanup shift like suckers for $7.40 an hour. That’s seventy-four cans. Nothing. And then the government come and snag a dozen of their cans. Murray’s boy can sneak that into a Hefty in five minutes, and no IRS man’ll ever dare dirtying his cuffs counting our cans.

We know those cleaners are jealous, so we work faster, smarter, covert, when they show up across the field of groomed grass. We slink beneath the bleachers, blend black like our Hefty bags into the shadows.

Wilfred is fed up of hiding. He jogs up while we sneak down. His face gleams in the halide lights, painted up like a clown, all white with black eyes, a stretched-out black mouth. He sprints from one can to the next. Wilfred wants us to call him Spike, hates what he calls his slave name, but he’s as white as Two-Tooth Linus’ snaggle-tooth incisors. His face ain’t painted like the can droppers, the bleacher people who wore streaks of green and white, and blue and yellow. Wilfred don’t paint his face for the team but for some rap group. Not just music but a revolution, he says. But revolution never comes. We know that from when we watched Kennedy’s head explode on our TV sets, from the GM factories, from the building bust when we pawned our power tools. Nothing changes. And the only music that matters is the crunching of a missed can under our feet, almost missed until it sings, and then plink-tinkle in the Hefty.

Wilfred is taunting fate, a backtracking race to the top bleachers, where he spies a tallboy sparkling. The sucker cleaners spot him, beep their walkie-talkie. Security men on their way. He don’t care, hollers to them that they can’t keep him down. They huddle around the talkie, point and chatter. Bright under the spotlights, Wilfred drops his pants, flops his dick at them, swings his Hefty in the air. And, oh, nothing them suckers can do but cower and report.

We know what’s coming. We keep our heads down. Bending and plucking. Our Hefty bags bulge, but we keep jamming. No time for no more Baby Trudy drop-offs now. Still so many glints around us, our fingers not fast enough. A damn shame Wilfred’s so dumb. Dropout, spray-can huffer, lanky braindead motherfucker. A thirty-bag night fades into a fifteen-bagger.

Worthless Wilfred already high-tailed it back to his daddy’s truck. We count down, watch their glowing legs slicing through the bleacher supports. Past the forty, the thirty, twenty-five. Five yards a can, we figure. Maybe ten for Linus and his dripping finger, spouting more now that the blood’s pumping. Past the end zone, and that means they’ll hunt the bleacher shadows, means quitting time for our seam-splitting Heftys.

We make for the truck. Fast but smooth so we don’t jostle our paychecks too much. One hole and we got an aluminum leak. Linus can’t keep up, so we sling his bag over our shoulder. To the gates, out the fence, and Wilfred’s got the engine hot in the parking lot. We peel out, and those security boys’ll be left with full mace cans and adrenaline. If only they looked at their feet, saw what we see. We wonder if the cleaners will save those cans or toss them, not worth the time to sort it out. That time that’s hardly worth nothing. We wonder if everyone forgot that promise Michigan made to us: our trash always worth a dime.

In Murray’s bed, we grip the rails with one hand, hug our Hefty bags from falling with the other. Inside the cab, Murray swats Wilfred backside the head, yelling something. Wilfred takes off his shirt and gets to wiping away that paint. Linus finds Baby Trudy face up, arms and legs spread securely over our bags. She’s watching the streetlights whip past. He’d stroke her dirty blond hair, but one hand’s bleeding and the other holds on tight.

Dustin Hoffman has an MFA from Bowling Green State University and is currently working on a PhD in creative writing at Western Michigan University. His work has recently been published or is forthcoming in Artifice, Gargoyle, Cream City Review, Black Warrior Review, Copper Nickel, Southeast Review, and Indiana Review. 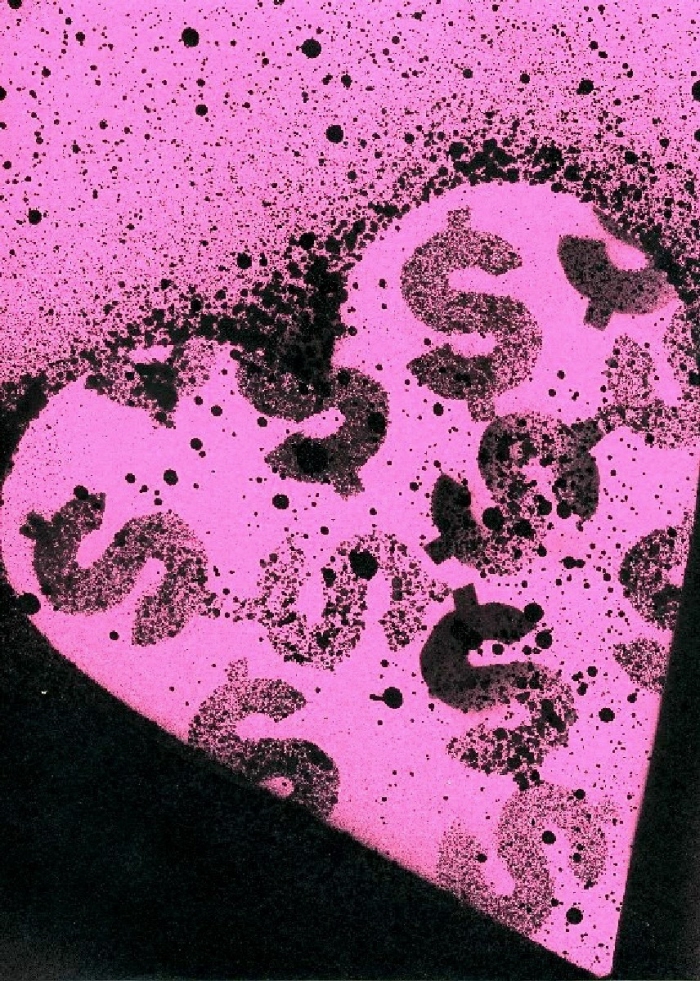