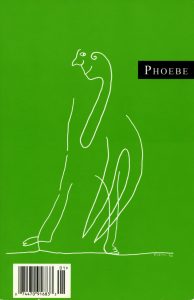 The peacock is so extravagant
His cry so open
His form so forgiven
God, what else could a man or woman
want than to be the blessed inhabitant

Of such a body. To have milled the boards
for its housing. Hemlock no less,
what a piece of work, the peacock’s
floors are all tongue and groove

To have stood on that roof
And glimpsed, hammer in hand, as he stepped
from his robe into the bath
they had drawn for him, what feeling
I had!
I crashed through the skylight as if it were thatch.
I came down as if I were the god hatched
From heaven, breaking through the ceiling.
He stood there amid the glass and touched my head

his eyes empty like those of a deer
his legs like freshly planed pine, his mouth opening
but then closed.
I shook violently, and as my vision began to fade
He turned his wet feet and pattered away.

This perfect boy who drew me to the ground
returned to his bath unopposed.

Peter Streckfus is the author of two poetry books: Errings, winner of Fordham University Press’s 2013 POL Editor’s Prize, and The Cuckoo, which won the Yale Series of Younger Poets competition in 2003. His poems appear in journals such as The Chicago Review, The New Republic, Seattle Review, and Slate. His awards include fellowships and grants from the Breadloaf Writers’ Conference, the Peter S. Reed Foundation, the University of Alabama, the American Academy of Arts and Letters, and the American Academy in Rome where he is a Fellow in Literature. He lives in the Washington DC area with his wife, poet and translator Heather Green, and is on the faculty of the Creative Writing Program at George Mason University.