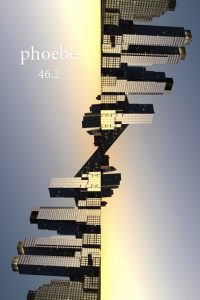 Where’s the baby? I called out in the dark.

Half asleep, I sat up in bed.

Where’s the baby? I asked again.

I’d been troubled recently by dreams of abandonment and forgetting—vague, formless visions and fragments—the only tangible evidence most nights, a sweat-soaked pillow. No clear images or stories I could relate the next morning. But tonight I was awakened by worry over a baby, a child we hadn’t really even considered seriously. I called out and my wife mumbled her response:

We don’t have a baby.

Then she rolled over and went back to sleep. The dog paced the hall and stood in the door, looking up at me. I could just make out her shape in the shadows. Emptiness settled over the house again and I tried to quiet my trembling brain.

Some nights I wondered if I was still recovering. It had only been a few months since sickness racked my body, leaving me dehydrated from vomiting and suffering non-stop searing headaches that made it nearly impossible to move or sleep or think clearly. It felt as if someone was trying to shove my eyeballs out from the inside. I spent almost a week in the fetal position before I was admitted to hospital, given a spinal tap, and diagnosed with viral meningitis. I couldn’t think straight for a while afterward, my brain slowly emerging from the fog of infection. I tired easily, had trouble eating, and lost 17 pounds in two weeks before I started to recover.

Two nights after my baby dream, I sat up in bed again, awakened by a new noise this time. Something loud and sharp. Unusual and shattering. Out of context. Outside and unwanted. I slipped on a robe and walked to the back of the house. I opened the sliding glass door and peered up into a shark-bitten sky, ragged with clouds. The air felt cold on my chest. I heard something out in the street, some kind of commotion. The dog bounced behind me, her hackles stiff, and the neighbor pets howled a warning call.

What could it be?

Who is out there, in the dark?

The eyes of street lights burned overhead like Orson’s alien ships and the air looked like it had been scrubbed clean, shined, and buffed clear, as if I was staring through glass, at the night scene captured in a jar. I walked through the weedy yard, the dog tracking at my heel, and peered around the garage. In the street, a Jeep lay on its side, the wheels exposed to my view. Three college boys in baseball caps and blue jeans stood around staring at the wreck. Nobody seemed hurt. But I heard one of them say, “It’s leaking gas,” as another boy dug out his cellphone.

They’d taken the corner too fast and rolled their Jeep.

We lived at an intersection, a corner where a short side street that fed into a series of boxy apartment complexes T’d into another street. Police sometimes parked on the side street to catch cars speeding down the other one. The corner wasn’t an especially noisy corner and it was located across from a large flood-control basin perfect for walking the dog. That night there was nobody else around. Just us and stars.

It was late, well past 2 a.m. and I should have gone back to bed. But I tiptoed closer, barefoot in the wet grass, because I wanted to see more. The boys were lucky the Jeep didn’t roll all the way over. I watched them and I could see the panic in their movements, the worry in the way they put their hands to their heads. They were probably drunk and hoping the Police didn’t show up.

I saw those boys, vulnerable beneath the streetlights, and thought of my own youth gone, the memories of similar misadventures with friends, and I wanted to help. I wanted to tell them to run or rush to their side and help lift the Jeep—which they tried to do without my help, to no avail. I wanted to reach out to them, but I was nearly naked beneath my robe; and I knew that perhaps the best way I could help them was by not calling the Police.

I watched the boys’ friends arrive in a SUV, and the five of them, working quickly, tied a tow-rope to the roll-bar of the Jeep and then used the other truck to pull it back upright. It was an impressive display of teamwork and togetherness, of problem solving and common sense—the sort of things I imagined any father would want for his son; and I felt a strange surge of pride. Perhaps I should’ve been afraid, should’ve thought to call their parents or to warn them against carelessness. Instead, I wanted to cheer as the boys untied the rope, jumped in the Jeep, started it up, and drove away. I was happy for them and for the story they’d have to tell later.

The dog and I walked back into the rented house where we lived, not a home so much as a stopping point, an intersection between my tenuous twenties and something else. I moved on my skinned feet, back to my wife, over the night floors dusted with the expectant promise of those words:

We don’t have a baby.

I couldn’t shake the language of my wake-up dream, not this night, not with the moon so fat, not with empty rooms calling and the college boys disappearing into the night. Through the sprinkle of broken window glass on the asphalt, I’d seen the tar of my future, thick with hope for a child, and I could not run from it.

Steven Church is the author of The Guinness Book of Me: a Memoir of Record, Theoretical Killings: Essays and Accidents, The Day After The Day After: My Atomic Angst, Ultrasonic: Essays (Lavender Ink), and One with the Tiger: Sublime and Violent Encounters between Humans and Animals. His essays have been published in Passages North, DIAGRAM, Brevity, River Teeth, The Rumpus, AGNI, The Pedestrian, Colorado Review, Creative Nonfiction, Terrain.org, and many others. He is a Founding Editor and Nonfiction Editor for the nationally recognized literary magazine, The Normal School; and he teaches in the MFA Program at Fresno State. “Wake Up Call” is part of his upcoming essay collection, I’m Just Getting to the Disturbing Part, which will be released in Spring of 2018.