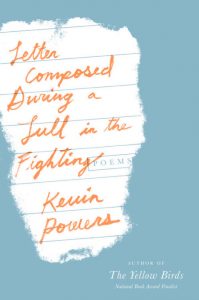 Letter Composed During a Lull in the Fighting

The Weight of What Remains: A Review of Kevin Powers’ Letter Composed During a Lull in the Fighting

Kevin Powers is a poet who knows our country is blackout drunk on “making little pieces of metal pass through each other” (5). Because he has been to war and fired his machine gun at Iraqis in Mosul and Tal Afar, and lived to write about it, Powers’ book, full of hard questions and messy deaths, is part of a larger body of literature evoked by America’s war industry that illustrates the stupefying beauty of annihilation. And yet, Powers is not satisfied with articulating loss in order to gain sympathy for the newly dead or to lament the ceaseless procession of soldiers marching toward their graves. Make no mistake: War drums are not pounding in these poems, nor are these one-dimensional poems meant to somehow valorize America’s vast industry of exporting murder. Instead, readers hear the subtle lub-dub, lub-dub, of an arrhythmic heartbeat emanating from the senseless brutality of modern warfare.

Powers’ work is evidence of the trauma that manifests after the shelling stops, when the world (as though recently embraced by king Midas) is left shining and dead. The line, “I am home and whole, so to speak” carries in those three simple words, so to speak, the promise of mutual destruction (23). The speaker has killed for his country so we do not call it murder, but the arbitrary (some would say nonsense or nonexistent) difference between such categories of destruction cannot be heard over the gunfire, and in the end death is death. At any rate, it is apparent in Powers’ work that a mind and heart inclined toward poetry is unable to compartmentalize in such a way. The result seems to be this: regardless of circumstances, every act of killing carries a toll to be paid by the killer, the only question is what happens when that toll accumulates beyond a person’s ability to pay it. As Powers writes, “what / is the calculus of change required / to find what’s lost if what’s lost is you” (41).

Powers articulates the gulf between young men who serve and young men who stay home in his poem, “Separation,” which hinges on the speaker’s recollection of separation anxiety over no longer having his army-issued rifle. The speaker sees “Young Republicans / in pink popped-collar shirts” in a bar and wants to familiarize them with the knowledge of war by rubbing “their clean / bodies in blood” (43). The speaker remembers feeling old, crying, and being laughed at, which illustrates the gap in consciousness between the mind that simply votes for war and the mind that is tasked with fighting the war. As a boy who stayed home from war but is not laughing, I am all too frequently reminded that death commonly answers the question of how to treat each other, each in our own way earning the right, as Powers’ writes, to “be unseemly” (41). Powers complicates things further in his poem “Photographing the Newly Dead,” in which the speaker remembers snapping a photo during the moments after a killing: “Someone laughed as it was taken. / Everyone wave good-bye, / we said and laughed again / when our relief arrived” (47). Laughter functions in competing ways in these two poems. First, laughter is used to distance the speaker from the “Young Republicans” and their cruelty toward the speaker. Next, laughter is something the speaker does with his fellow soldiers as a ritual, something recognizable and palatable in an otherwise distorting experience, distancing the apparently living from the obviously dead. There are two important clues from Powers that photographing the dead provides a kind of physicality to contrast or rewrite the loss of human life, allowing the newly killed to be reborn in silver nitrate, recording the death beyond simple memory. The first clue comes from Susan Sontag’s epigraph, “Images anesthetize,” which reminds us that images eventually make us numb. But images are also a way for us to mitigate the fallout of our brutality by allowing us to construct from our collective horror something tangible, something sterile and diminished. The second clue comes from the line “What one / must always answer for / is not what has been done, but / for the weight of what remains / as residue…” (49). Adrenaline screams, it was you or the other guy, and we stifle our doubt. Anyone who has ever caused significant violence knows the way doubt, that weighty residue, remains long after adrenaline leaves. Powers deftly captures the nagging feeling of relentlessly caring in the face of disproportionate suffering:

Think not of battles, but rather after,

when the tremor in your right leg

becomes a shake you cannot stop, when the burned man’s

tendoned cheeks are locked into a scream that,

before you sank the bullet in his brain to end it,

had been quite loud. Think of how he still seems to scream.

Powers’ poems seem to say that, when trauma makes a home in our chest, the best we can do is face it honestly or label it something else, but either way the pain stays with us for the long haul. And yet, despite the debilitating effects of combat and all its reality-distorting manifestations, Powers manages to weave hope into his lines. A reader will likely get the sense that we are meaningless, insignificant flotsam, and yet Powers says, “I promise / someone will love you anyway” (p. 92).

Maule is an MFA candidate at the Rainier Writing Workshop in Tacoma, Washington, the author of one book of poems, Dog Star (2015, Big Yes Press), the winner of the 2014 Academy of American Poets Contest at Cal Poly, SLO, and co-editor of Aperçus, an online literary magazine (www.apercuslitmag.com). His poetry has appeared in Byzantium, Badlands, and Askew, and he recently published a review of Reginald Dwayne Betts’ Bastards of the Reagan Era in Talking River, as well as a review of Adrian Matejka’s Map to the Stars in Rain Taxi.