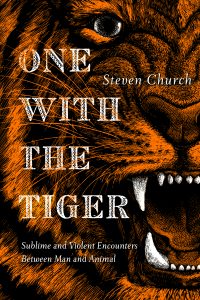 One with the Tiger

Think of the last time you went to the zoo.

This is how I recall my most recent visit. An oppressively hot and humid summer day; all around me sweaty parents lugged bulky strollers and neared the brink of losing their mind (if they were not already past that point) as their kids complained, cried, or screamed. When I entered the Great Ape House and saw my favorite animal, the orangutan, I initially felt satisfied. Yet, I was soon overcome by the heat and stench of the building’s walls. It was difficult to breathe. I looked again at the orangutan behind glass.

This orangutan seemed physically and mentally exhausted. I felt pity, guilt, and sadness.

Perhaps what you felt during your last zoo visit was less existential, more like happiness or appreciation, or, perhaps, these kinds of thoughts did not cross your mind at all. Surely, though, many of us have looked at a zoo animal and subsequently sized up the moats and fences designed to keep the animal in/humans out and arrived at a number of possible conclusions:

Once, I might have walked away without giving much thought to such issues. But, reading Steven Church’s latest book, I come away with a renewed interest and focus on the ways in which we transcend artificial divisions between human and animal, instead seeing the ways that we straddle or jump the barrier between these distinctions.

In One with the Tiger, Steven Church references the visits he and his daughter frequently took to the Fresno Chaffee Zoo. As might happen with children at zoos, whenever Church brought her, he’d “turn around to find her drifting over to the old African savannah area where her favorite animal, Stoney the Camel, stood in the sun as an ostrich picked bugs from his butt.” She is captivated, which is what we might expect of a child at the zoo: to be consumed by some undeniable pull.

Yet, Church notices his daughter’s quirky defiance of expectation in her choice of favorite animal. She quietly enjoys not the lions that roar or the gorillas that beat their chest, but the tranquility of Stoney the Camel—an animal more known for its docility than showy or ferocious behavior. He writes, “maybe that’s what my daughter appreciated about Stoney, that sense of peace, the lack of any anxious energy that seemed to define so many of the other animals in the zoo.” In this sense, this shared peace is how his daughter connects with the camel; it makes them one. This is as innocent as a human’s perceived connection to an animal will get.

As the title, One with the Tiger, suggests, Church explores not the distance one feels from a caged animal, but the intimacy one may desire—how that awe or joy can lead to wanting something else and possibly something more.

In the opening essay, Church retraces the footsteps of a man whose path through the Bronx Zoo ended just after his feet pushed off an open-faced monorail, right where they landed on the curated earth within a tiger exhibit. Immediately, tigers set out to attack, clawing and biting the man before he was saved by zookeepers. The man evaded jail by entering a mental institution. It made headlines. The question of why any human would want to jump into a tiger cage is easily asked, but hard to answer. To do so, Church follows the jumper’s steps to the point of the jump and then implicates the many who walk away, who read the headlines, by indicating that they are not so different from the few who jump. He includes himself: “I guess I’m also trying to understand my own interest and compulsion to come close to this experience, my lifelong desire to inhabit these tales of survival in the face of animal savagery, as well as the larger pop culture embrace of these stories. Why do such stories persist, and why do we persist in loving them?”

Among the narratives which appear in One with the Tiger are some that there’s a good chance you know: The Revenant’s bear-attack scene; Janey Craighead and Michelle Koons—miles apart in Glacier National Park one night in 1967—both eaten by bears; Timothy Treadwell attempting and failing to live amongst grizzlies; Grizzly Man, Werner Herzog’s documentary about Treadwell; Mike Tyson biting off his opponent’s ear; a Connecticut woman whose pet chimpanzee bit off her friend’s face; the several people who have broken into zoo exhibits, most never getting back out. The stories that consumes one’s attention to its subjects and nothing else. Church turns this eclectic gaze inwards, back on everyone who has been watching.

From the opening essay, Church’s prose jumps deftly without falling, which may be contrary to many of the minds he inhabits. Hopping from characters bracing to hit the ground, to others whose feet are rooted, to others in boundless mid-leap, the white space between each section warrants readers to reflect every time the narrative is in midair. The amalgamation familiarizes both gravity and suspense, urging one to keep reading in pursuit of Church’s bold notion—the few who jump into animal cages are akin to the many who innately obey a zoo’s moats and fences; both types of humans may be more one with each other than they are with any animal.

This is Steven Church’s One with the Tiger: a collection of lyrical essays which fuses stories of savagery, of animal instinct, and of ecstasy with his personal experience. Together, they speak to how someone can become so drawn to an animal that though their intentions to cohabitate and develop a relationship are pure, they forget what separates human from animal. When a human draws near to a tiger, one creature remains the predator and the other, the prey.

Ryan McDonald is the Nonfiction Co-Editor of Phoebe and MFA student studying creative nonfiction at George Mason University. He earned his B.A. in English at the University of Massachusetts Amherst. He has published work in The Bitchin’ Kitsch.