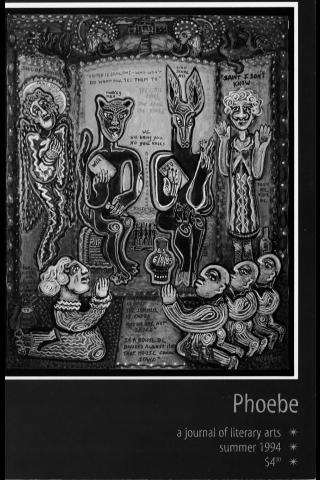 this is a place without a terrain a government that always changes an
unstable language. Even buildings disappear from day to day.

the condition of bearableness is the constant state of mind for all
occupants.

[the question or the statement

realism’s authenticities are not the question

the question [role of art in the State

we know art is fundamental to the [New State] as is evidenced in village
scenes, majestic ancient views, masses and masses of [generic human
figures] marching in columns, swords coded as plowshares, image as
spectacle

we know [name of major historical figure] calls, authentically, for a more
total, more radical war than we can even dream of in the language of
the avant-garde

but sometimes we exceed our own expectations to surprise even ourselves

something encloses the impossible in a fable

an unreal world called real because it is so heavily metamorphic

we can’t keep our fingers of connection out of it

it is a ride in the country, the car crowded with children
[each child represents a different ethnicity of [name of
nation]

it is a guiding of the child towards the right path

it is a picnic field, the spread is bountiful [the spread of [name of
nation] is represented through the arrangement of the food on the
checkered table cloth]

it is [name of major historical figure]’s Art Collection:

figure after figure
each carries spears, lunges, draws the arm back to pull tight the bow

another plays a lute

an eagle holds a symbol

fake [name of nation used as an adjective] heads

while when nation turns to art, art loses its divergence

while the [generic human figures] come back from war, their legs in fog

while a [generic human figure] sculpts, small against the expanse of marble,
giving into the monumental human form that symbolizes eugenic
possibilities

of [name of major historical figure] hails a cab, his hands raised, beckoning
as the red flag with [name of fast food chain] waves behind [generic
human pronoun] and the red star on top of the [name of cultural
landmark in major city] twinkles.

many people raise their hands for different purposes all day long

we are always waiting for our cab to come

[it is impossible to speak about something

it is only possible to speak beside it

[a film with a voice over of nonsense

to act in the unsecular forbidden margins [claims a certain
privilege]

a scripture of space / a place where

some [refigure [refuse] respond] call out for an end

rewritten, the goal of the artist is to prevent reality in a true and concrete
manner

I SAW THIS written on the bottom

[a way of testimony

the poverty of image among the people of [name of nation]

returning again and again to images to torture

taped to a [gendered hand, adorned with a ring] is a photograph of
[gendered naked torso], gagged

[possible responses to what is seen

in [name of nation] at another time another set of responses:

another [generic human figure] sans impassionedly we express ourselves in
a language of regulations. Symbols and numbers best convey our
ideas.

another [generic human figure] makes an enormous painting of a massacre
victim, mutilated and bloody, and hangs it by night on a pedestrian
bridge

this font made each letter into a single scratch

a voice stutters in the background of our waking mind

[generic pronoun] stutter is our stutter

or it is the way we define our difference

at times two voices talk to one another

we know we are all constructed

when it comes down to it we don’t believe in

the social always holds us back

while the ways that we encounter relation are various

Juliana Spahr edits the book series Chain Links with Jena Osman and the collectively funded Subpress with nineteen other people and Commune Editions with Joshua Clover and Jasper Bernes. With David Buuck she wrote Army of Lovers. She has edited with Stephanie Young A Megaphone: Some Enactments, Some Numbers, and Some Essays about the Continued Usefulness of Crotchless-pants-and-a-machine-gun Feminism (Chain Links, 2011), with Joan Retallack Poetry & Pedagogy: the Challenge of the Contemporary (Palgrave, 2006), and with Claudia Rankine American Women Poets in the 21st Century (Wesleyan U P, 2002).