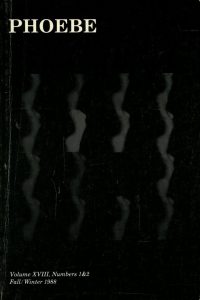 I can’t see it myself. The way I am, it’s over when it’s over. I don’t overstay, and I don’t look back. Take when Karen left. She walked out of the house just before noon on Sunday, September 5, and by 1:30 p.m. I had the bedroom walls painted and a new home for the cat she’d rescued from the neighbor’s Doberman but left behind. No sense thinking about what’s gone, I told myself.

Not like Karen. Some days when we were still together her eyes filled up with tears twice before she even brushed her teeth in the morning. I’d come up behind her in the bathroom and she’d be swatting at her nose with half a piece of toilet paper, while the tears collected on her eyelashes. “What is it now?” I’d ask, and she’d tell me a story about being the only girl in third grade without a poodle skirt or how she’d seen an old woman on the street wearing high-topped sneakers with no laces. “It’s sad, David,” she’d say, but I could never see it. I mean, it wasn’t like she wanted a poodle skirt now, and how could she know the old woman wasn’t just an eccentric basketball fan? But all her stories were like that. Okay, maybe some of them were sad, but every one was about things over and done with a long time ago.

Once when I said that to her, though, she looked at me like you do someone who spits on the street. “Maybe it’s not the poodle skirt, David,” she said. “Maybe I’m crying because my father died when I was seven, or because my mother married a claims adjuster, or because you don’t know why I’m crying.” I said, “Oh,” and I started waking up in the mornings knowing she was going to leave me.

I’d be in bed and hear her blowing her nose and think, “Maybe it’s today.” When she did leave, we didn’t talk much. She said she thought it was for the best, and I said I wished she’d stay. But she didn’t.

When I think about it—and it’s not very often now—I imagine her coming into the bathroom where I’m shaving. She notices my eyes are red and she puts her hands on my robe, the blue terrycloth one she bought our first Christmas together. “What is it, David?” she asks, and I tell her a story.

It’s a fall day in Abilene, where I grew up, and I’m walking down a crowded street at lunchtime. Just ahead of me, there’s a man in his 30s holding the hand of a child I think must be his daughter. From the back, I can see the little girl is dressed for a party in a pink velvet dress with a lace collar. She has on black patent leather shoes and pink socks with flowers stitched on the cuffs. But it’s her hair I notice most. It’s blonde and hangs in tight curls almost to her shoulders. She’s a little princess, this girl, and I’m smiling, enjoying the brisk way she walks and the sound her shoes make on the pavement.

At the light, we all stop in a clump and the father bends down to speak to her. I edge around them to see the little girl’s face. When I do, it’s a shock: all her features are pushed in, flat, like those cartoon characters who run—Bam!—into plate glass. She’s a Downs’ Syndrome child, I realize, and I walk away quickly just as the light changes. I don’t look back.

I think about that little girl sometimes, I see myself telling Karen, and I wonder what her parents were thinking about when they dressed her and curled her hair. Maybe they just loved their daughter and wanted her to have pretty things. Or maybe—and this is what I find myself thinking—maybe they just didn’t understand that it’s the distance between the way you want things to be and the way they are that hurts the most. That’s what I think anyway.

Lynna Williams is an associate professor of English and Creative Writing at Emory University, specializing in fiction and nonfiction. She has an undergraduate degree from the University of Missouri School of Journalism and an MFA in fiction from George Mason University. Her short fiction has appeared in The Atlantic Monthly, Lear’s, The Oxford American, Crab Orchard Review, and other literary magazines.