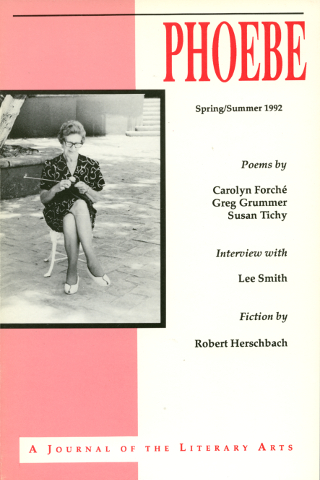 Everything about Morris Whipp was big–big face, big hands, big lips, big waist. He lived next door to us when I was a skinny five-year-old, and he had a boot print that was as long and as deep as my five-year-old chest–I know because my older brother made me lie down beside the print so he could measure. He wore a cowboy hat that was big enough to carry clothes to a clothesline, and he drove a truck with big tires and big letters that announced to the world who he was: “Morris Whipp, Auctioneer.” A cheerful little beagle called Rebel would follow him, bouncing up and down and trying to lick his master’s thick hand. From a distance, Rebel looked like a bobbing black speck beside Morris.

Capon County, West Virginia, where I grew up, has an ample collection of characters. One county man, who chews tobacco and carries a shotgun, wears a dress–not because he wants to be a woman, but because the dress is comfortable. Another man tried to improve his television reception by devising an elaborate system of wires that connected his antenna to his wire bedsprings. He was delighted with the reception until one night when he and his wife were unexpectedly invigorated by a lightning storm. I could mention many other West Virginia characters, but none of them had or have the epic stature of one Morris Whipp, auctioneer.

Morris’s passion was noise. He liked loud sounds–burps and horns, whistles and bellows, sirens and booms. He was perfectly suited to be an auctioneer because nothing was more satisfying to him than to shout long and loud and fast. He didn’t need a microphone to amplify his voice. A county commissioner once said he could hear Morris call out the price of a spoon from three miles away.

In evenings after supper he liked to walk out on his front porch and holler. To help himself holler better he would gulp down a tablespoon of the sharpest horseradish his wife could make. With one swallow, he filled his lungs with a bellow that could make all the birds in the neighborhood become quiet with fright. The only time I ever heard my grandmother swear was after she heard Morris bellow for the first time. We were sitting quietly on our porch, probably talking about how nice the dinner was. Suddenly Morris bellowed “MOON,” or some such word. I saw my grandmother duck, as if she were trying to escape a large hand from slapping her hair, and then she said, “What the hell was that? My grandmother’s lips and the word hell were as incongruent as velvet and spit.

Morris loved the loudness of his voice, the satisfying reverberation it made in his chest and throat. But any noise pleased him. He bought a train engine, set it up in his backyard, and would go out on Sunday afternoon and blow the whistle–shattering the peace of Sunday naps and obliterating the memory of his preacher’s syrupy whispers. He had no patience for the polite quietness of preachers or the daintiness of old ladies. He despised secrets and closed doors. He abhorred shyness and discretion. He believed in openness, and he taught me that if a man’s got to belch, he belches–the louder and the deeper, the more satisfying. A man doesn’t muddle his belches in a starched napkin. And he doesn’t say excuse me. That kind of prissiness is for ladies and little girls.

Morris was big and loud, but what really caused him to step out of the category of ordinary men–at least for my brother and me–was an event we witnessed one Saturday afternoon in Morris’s backyard. David and I were firing our guns at each other on the hill above Morris’s property. With each paltry snap of our guns, we would imitate dying, falling like flowers to the earth. When we looked over the hill onto Morris’s yard, we saw his son playing fetch with Rebel. Both seemed to be waiting for something big to happen. Every now and then they would look at the back door. Soon we saw what Big Thing they were waiting for.

Morris swung open the screen door and walked into the back yard shouting his son’s name. “MOOSE!” His son’s name was Morris Junior, but the way Senior said it sounded like Moose.

“Yes, Pa,” said his son, who was a trembling, skinny replica of Morris.

“MOOSE, bring my whip.” Moose ran to the woodshed, opened the door, and then we saw him drag out a dark whip. He carried just the handle and pulled the length of it behind him to his father. It looked like seventeen black snakes tied tail to tail. When he put it in his father’s fat hands, Morris coiled it and dropped it like a tame creature at his feet.

“NOW GO GET ME THOSE little things IN THE BOX..”

Then we saw Moose become cheerful, and he said “Yes sir, Pa,” and he ran to the shed. When he came back, he was holding a cigar box full of shiny things, and he was smiling as if this was what he’d been waiting for. Then Morris said, “NOW MOOSE TELL THEM BOYS UP ON THE HILL–them little Gainer boys who been snapping those toy guns–TELL THEM TO COME DOWN HERE. I WANT THEM TO SEE WHAT I’M GOING TO DO TO THOSE little things IN THAT BOX.”

“Yes sir, Pa,” Moose said, and then he shouted to us. “Gainer Boys on the hill, come down here. My Pa wants to show you something.” My brother’s face was white, and I could tell he felt the way I felt. We would both rather go home, drink Kool-Aid and listen to our mother read us a quiet story about bunnies and birds. But we didn’t dare disobey. Not with the whip at Morris’s feet. We strolled down the hill, our empty holsters dangling at our sides and the cap guns hanging in our heads.

When we got to the bottom of the hill, Morris said to us, in almost a whisper, “Now boys, you stand over there… No, that’s too close. If I swatted you with this whip, you’re liable to get flicked across the yard. That’s it. Stand right there. OK, NOW MOOSE. DO WHAT I SHOWED YOU BEFORE.” Moose ran over to a wooden sign, about 30 feet from where his father stood, and took out of the cigar box a pocket watch. He glanced at it admiringly in his hands and then tacked it to the sign. “BACK AWAY SON,” Morris said.

Then Morris reached down and grabbed the whip and began to swing it around his head. At first, it just hummed and whistled as it built speed, but then the whip really began to swoop through the air and sounded like building thunder. Suddenly, Morris jerked his wrist and the whip barked, cracking the air and clapping an echo against my chest. Then he made the whip swoop again. It rumbled and whimpered and curled back on itself, whirring over our heads. We saw the whip lick the face of the watch, like the tongue of a snake before it bites. Suddenly, with a whooping yell that sounded almost like the whip itself, Morris jerked his wrist again, and we saw the whip snap against the watch, startling it, as both arms hung down in what appeared to be shock. Morris and Moose both yelled and whooped, hollered and laughed like warriors in victory. Rebel howled and pranced and then squatted and howled again. Then Morris looked at his and said, “WHAT DO YOU THINK OF THAT, YOU little Gainer boys.”

“Yea. What do you think of that, you little Gainer boys,” Moose said.

We watched as Moose and Morris repeated this over and over. Moose tacked the watches and Morris stunned time with a death that they didn’t expect, their insides hanging out, beautiful glimmering springs and mechanisms that some jeweller had quietly pieced together. We stayed there, entranced, as we watched this big man annihilate time over and over again. And each time the whip slapped against the watches, causing them to vomit their tiny silver gut, Morris and Moose celebrated, screaming, yelling, and laughing. Frankly, my brother and I didn’t know what to think. We knew we were watching something Big. Morris, of course, was big, but with the swooping whip that encircled our heads–encompassing the space around us, scaring the air that we breathed and scolding the timepieces with a sudden slap–Morris was making Big even Bigger. We stayed until our mother called us home. She said that she had taken a nap, that all the clocks in our house had stopped and she didn’t realize how late it was. As we walked home, we heard Morris bellow with an extravagant guffaw, “Them boys know why the clocks stopped, now don’t they?” And Moose laughed too. From that day on, Morris seemed to walk on this earth in an even bigger way. We watched him leave his truck and take his powerful steps into his house. We heard him bellow out unknown words from his porch and listened to them return to him on echoes like servants. We saw him at auctions, babbling so fast that no one could keep up with him, and yet uttering words that made people raise their hands and nod and buy toilet seats and broken down washing machines. Somehow, after that day Morris seemed to be more like Thor or Hercules than our next door neighbor. That afternoon happened years ago, and both my brother and I have since moved from West Virginia. I hear from people who still live there that Morris is as big as ever, wearing cowboy hats, driving his red truck from auction to auction, walking out on his porch and fetching from his lungs a bellow as deep as life. While I wait at a stop light or standing in line at some government agency in this city where I now live, I like to think that on Saturday afternoons Morris sends Moose for his whip and his box of little things. I like to imagine that the neighborhood thunders with the sound of the whip’s crack and Morris’s laughter. And I like to believe that Morris still slaps time in the face and makes it pout like a baby.