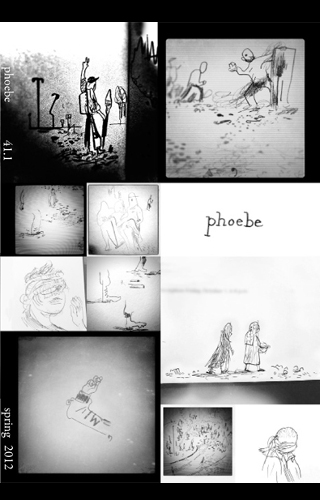 This will hurt, he told me, and it did, but I was determined not to show my pain.  And I didn’t.  But I sure felt the sharp prick of the needle as it repeatedly entered my ear in different places, each injection a hot star, part of a constellation the E.R. doctor was shooting into the swollen, blood-covered cartilage on the right side of my head.  As he filled it with a local anesthetic, my ear burned, so I decided to focus my attention on my breath: breathing in, the belly rises . . . breathing out, the belly falls . . . soft belly, let the belly be soft . . . breathing in . . . belly rises . . . breathing out . . . belly falls.  I was lying on my left side on an examination table at St. Joseph’s Hospital in Bellingham, watching the assistant (who sat directly in front of me) enter notes into her laptop computer. The physician, Dr. Brad Bigelow, stood behind me doing his work.

Dr. Bigelow had lean, sharp features, light brown hair, and eyes the shade of a river colored with iron ore. Soon I could only feel pressure and a scrubbing sensation as he began to clean my ear.

The hole in the back of your head is a bullet wound; we’ll get to that after I stitch your ear back together.  But this hole in your ear is not from a bullet.  It looks like it came from a sharp object.  Were you hit with the butt of the gun?

I might have been. . . I’m not sure. . .  I was trying hard to remember what had happened a few hours earlier.  I’d finished my day at the university and was walking the path I’d taken home since beginning grad school 6 weeks earlier.  It was a little before 4:00 p.m., a time that my partner, Patricia, and I had set aside to go for a walk along the bay at Boulevard Park. She was waiting for me at my apartment on Douglas Avenue, a few blocks away.  After crossing Bill McDonald Parkway on the south end of the campus, I took the gravel-covered trail that cut through a wooded area, leading directly to Douglas Avenue.

Initially, this sinuous trail descends precipitously and then becomes a gradual downhill slope, eventually leveling out.  Blackberries, alder, and fir trees obscure the nearby apartments, and the music of an adjacent stream heightens the sense of seclusion. Often deer can be seen in the woods, feeding on tender leaves. About half way down the trail on the right side, three cedar trees come out of the same place in the earth, their trunks pressed against each other before they gradually diverge overhead.  I had passed the cedar trees and had a little more than a block to go before I reached Douglas.

I didn’t think much about the two men coming up the trail toward me, walking almost sideways, looking behind them like they were waiting for someone else to catch up.  They were well-groomed, like affluent college students.  As I approached them, the one closest to me turned to face me, opened his black jacket, and drew out a pistol that was tucked inside the front of his jeans.  I clearly remember how the gun looked the instant before he drew it: black metal with a brown handle that had a single black rivet near its base.  The clip had a black lip that protruded. I also remember his eyes, dark and hard, like ball-peen hammers. They were a little glazed, like he was on meth or something.  As he drew the gun with his right hand, he pulled the slider back with his left, pointed it at my head, and said: Give me your backpack.  (It all happened in one second.)

My response was surprising and clear. No, I told him, and continued moving forward, stepping to the right off the trail to pass him on his left.  In that one second I also remember seeing a gun in the other man’s belt, the man wearing a yellow windbreaker who approached on this man’s right.  I remember having a flood of thoughts all at once: I don’t have time for this shit.  You’re not going to shoot me here in broad daylight.  Maybe you will; no one else is around. Those eyes, he’s going to shoot me either way, a moving target is harder to hit. Flank them to the right. You’re bluffing.  If you want my backpack, you’re going to have to take it.

The thing was, I didn’t even have anything of monetary value in my backpack, just a pile of papers my English 101 students had turned in an hour and a half earlier, their second essays of the quarter.  Just my class roster and lesson plan for the day fastened on a clipboard.  Just my journal filled with my thoughts and poems. Just my reading glasses.  Just a pen.  Did I even remember what was in my pack?  Did it matter?  Robbing someone like this, a violation I felt in my bones. They would have thrown the papers and poems into a dumpster.

As I stepped to go past him my memory blurs.  I know he grabbed my jacket with his left hand, the missing button confirms that, and I know I felt his strength against mine in that instant. I don’t remember much else about the next second, what my body did, what he did, I just remember a twisting force, I remember thinking, this guy has had martial art training (the type I had twenty years ago.)  I could feel the control in his movement, the reflex-like pivot, the coordination of the lower body with his arms, the balance.  I remember the sense of getting free of his grasp, twisting away from him and then BANG, the feel of metal hitting me, like I was caught in the spring of a mousetrap, the snap against my head.  I remember at that moment thinking: sweet move, that was good, I thought I had gotten past you, but no . . .

After the BANG I kept walking and thought: Keep moving. Don’t look back.  You’re still alive.  After several steps I reached my hand up to the back of my head and felt the wet warmth and then saw my blood-covered hand.  I looked back and saw them moving quickly away from me, up the trail toward campus.

As Dr. Bigelow sewed my ear together, I could feel his skill.  By the way the needle moved through my ear and the way the thread was tied with each stitch, I knew I was in competent hands.  His hands had a confident feel to them. They moved with a deliberate rhythm and coordination, gentle but firm. But he surprised me with a question that came out of nowhere:  What is it about India that you like? Why did you go there?  (I must have looked puzzled.) The nurse, she told me you had just returned from a trip there this summer and that’s why you had all your shots up to date, why you didn’t require a tetanus shot.

I don’t know how to answer your question, doctor. India is such a big place, there’s so much: the countryside, the ruins, the beaches, the palaces, the ashrams, the markets, the people.  Maybe I go because it’s like another world, a place that’s based on different stories.  I don’t know if this makes sense, but I feel a pull so I keep going back.  Have you ever been to India?

No, but I want to go there.  There was a pause as he finished tying the last stitch.

What is it that draws you to India, doctor?

The mountains and the food.

So you’re a mountain man.  Where do you usually hike?

The Cascades, mainly, but I also get to the Wallowas now and then.

Ah, yes, the Wallowas.  Incredible.  I took my children backpacking there several times when they were younger.  We swam in the high lakes; the water was like ice.  We were crazy.

Not many people know about the Wallowas, George.  My son caught his first trout there in Wallowa Lake.  I’ve got your ear all stitched up.  I’m going to make an appointment for you with a plastic surgeon in two days.  I think the ear is going to heal okay, but I would like him to look at it soon.  I’m going to look at the wound on the back of your head next.

I felt him probing and cleaning the back of my head on the right side.  I knew my scalp was still covered in blood, still bleeding. I knew CT scan taken earlier did not show any bullet lodged in my head.

My God. There’s another hole over here on the left.  The bullet must have gone in here on the right side, and came out here on the left, this bigger hole.  (He was touching the back of my head, where it joins the neck.)  The bullet went between the skin and the base of your skull. You’re so lucky, an inch deeper and you wouldn’t be here.  I’m going to clean this up.  I’m not going to stitch the scalp together because I don’t want to risk an infection. You’ll have a couple places on the back of your head where the hair won’t grow.

I felt him clean both wounds, and then wash them.  I don’t know what solution he used; it didn’t sting.  Maybe it was just water.  But I felt it go through the two openings and it was a strange sensation, like a river running through the back of my head.  I felt him pad the area dry and apply some ointment to my scalp over the wounds.  Doctor, where is your son now?

He’s in Dublin, attending school there.

I’d love to visit Dublin someday.  Ever since I read Ulysses I’ve wanted to see that city.

I’ve never read Ulysses, George, but years ago when I was in school I read one of Joyce’s stories.  I don’t remember the name of it, such beautiful language, snow was falling, covering everything.

The Dead, I said, quickly, feeling something coming loose inside me.

What did you say?

The story you are referring to.  It’s called The Dead.  It’s the last story.  In his book. Dubliners.  The last paragraph. Tears were flowing from my eyes now, streaming down and across my face, through my nose, everywhere.  I could feel the pillow getting wet against my face.  I could feel my breathing going faster, louder.  I didn’t understand it.  I had always found that story moving, but now it seemed much more so, like a stopper was pulled from somewhere.  It felt like my body was crying and I was just laying there watching, disconnected from the source.

It’s okay, Dr. Bigelow reassured me. It’s normal to feel a lot of things after something like this.  I was looking into his assistant’s eyes.  She had been there all along, facing me, silently taking notes.  Her eyes were attentive, a light brown color, and they looked directly into mine. And the tears just kept coming.

George Such is currently a third-year English Ph.D. student at University of Louisiana Lafayette, where he has been awarded a University Fellowship. In a previous incarnation he was a chiropractor for twenty-seven years in eastern Washington. His poetry has appeared in Arroyo Literary Review, Barely South Review, The Cape Rock, Dislocate, and many other literary journals and his collection of poems Where the Body Lives was selected as winner of the 2012 Tiger’s Eye Chapbook Contest and is available from Tiger’s Eye Press.