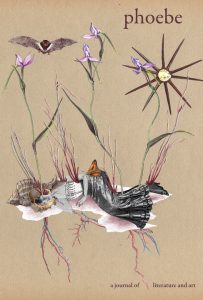 According to local legend, in the last century numerous
suicide attempts have taken place off the railroad bridge in
this Geneva, Illinois park.

We chased
the heron, the bridge,
a rafting concrete wave
hefted high.

the bastion train track,
bust track—
a human’s perch,
a faction, a fraction—

to be untied,
and given to granite,
carved into a willing water.
A dressage of slipping rocks
braced for the fall.

Fleshed against
the sidewalls
of underwater
blood canyons,

Water lilies and
still-motioning swings:
this is the heron’s
Pick-ground.

This poem was originally published in phoebe as “Le Parc de Suicides.”

Sandra Marchetti is the author of Confluence, a full-length collection of poetry from Sundress Publications (2015). She is also the author of four chapbooks of poetry and lyric essays, including Sight Lines (Speaking of Marvels Press, 2016), Heart Radicals (ELJ Editions, 2016), A Detail in the Landscape (Eating Dog Press, 2014), and The Canopy (MWC Press, 2012). Sandra’s poetry appears widely in Poet Lore, Blackbird, Subtropics, Ecotone, Southwest Review, and elsewhere. Her essays can be found at The Rumpus, Words Without Borders, Mid-American Review, Barrelhouse, and other venues. Sandy earned an MFA in Creative Writing—Poetry from George Mason University and lives in the Chicagoland area.