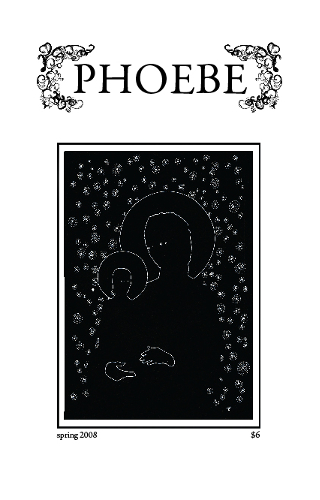 This was an hour before my dad brought his cancer into our lives. One hour before he reached inside the glovebox of our Dodge conversion van for the pamphlets. The ones with cartoons and words like benign, malignant, and larynx, all explained. I had just gotten my learner’s permit and we were coming back from Galveston on a Thursday night in June, having just packed our twelve Igloo coolers full of the shrimp that we sold from the van outside of a flea market on weekends. We were headed to our home in Fort Worth, where we’d unload the coolers and store them in the shed in his backyard. Driving through Huntsville, there were no lights other than ours. I was trying to keep the hood ornament lined up with the reflective white line on the side of the road, holding my foot steady to keep the speed consistent. My window was open and warm air slipped though. My dad sat in the passenger’s seat, sipping a can of Schlitz and smoking a Merit. He put out the cigarette and lit another, turned the radio down and rolled up his window, something he did when he was about to talk and needed me to listen close.

He held the cigarette between his knuckles as he spoke. He said, “You see this hill we’re coming on?”

I squinted and leaned forward to see and said, “Yes.”

“One night while I was making this trip by myself,” he said, “right about here where we’re at now, I saw your granddad’s ghost sitting where I’m sitting. As real as me beside you. Right here in this seat.” He tapped the side of his chair.

I looked at him out of the corner of my eye and said, “Yeah, right.” He didn’t say anything for a minute and I looked over to see he wasn’t smiling or grinning. I said, “You saw Buddy?”

He shook his empty beer can, rolled the window down a little, and tossed it out. As he reached behind his seat to grab another from his styrofoam cooler, he pushed the button on the glove compartment and closed it right back up. He flicked ice off the can. “I was driving,” he said. “Going between eighty and ninety miles an hour, when I hear this voice. Clear as day, it says, ‘Wrendon, you need to slow this son of a bitch down.’ I looked over, and sure enough it was him. Do you remember those short-sleeve button-downs he wore? The way he kept his hair combed back over his head?”

Buddy had died three years before. I remembered his clothes. His white face and deep wrinkles, and the peppermint smell of the Brylcreem in his hair. I felt cold and rolled up my window so my dad’s voice was clearer.

“I started to slow down,” he said. “Going about sixty, coming up over this hill when he says it again. He said, ‘Wrendon, I’m not kidding. You slow this son of a bitch down.’”

I watched the road through the windshield, imagining Buddy’s voice, deep and stern. He spoke in a way where he’d never needed to repeat himself. I didn’t mean to slow the van down, but saw the dashes of yellow lines in the road getting clearer. We were the only car that I had seen for miles, and now in the dark surrounded by pine trees we seemed far off into nowhere. I wanted my dad to stop and laugh and say he was kidding.

“So I did it,” he said. “By the time we reached the top, I was only doing twenty miles an hour. And as I came over this hill, the engine cut out completely.” He took another long drink from his beer. “All I had were the headlights and lights from the console. I looked over and Buddy was gone. I coasted over the top of this hill. And do you know what was on the other side? Have I told you this?”

“A semi was jack-knifed in the road,” he said. “A big red Peterbilt, with the trailer turned over, spread out from one side of the highway to the next. A big wall.”

And I saw it. A red truck with its face turned toward us, the large rectangular trailer laying across both lanes of the highway. Our van was nearly at a standstill, there in the dark. I could have counted out the black tar lines in the road, like little cracks.

My dad said to me, “What are you doing? Why are you going so slow?” He waved his hand in a shooing motion, saying to push forward, and with that all of what I saw was gone.

I pushed on the gas.

“I wouldn’t be here tonight,” he said, “had your granddad not appeared. I would have driven straight into that semi. It would have killed me. But it didn’t. And do you know why?”

The road got smooth again, with the lines flowing beneath us. I sat back down, feeling my heart in my chest, the sweat on my hands.

“Because my dad was still with me, keeping an eye out.”

He sat back in his chair for a moment, looking forward. I looked at the rearview mirror. The road was empty. The night before us hung in the sky, the large pine trees lined the road. I had stopped looking out at the ornament on the hood of the van and knew I wouldn’t need to do that anymore. My arms stayed tight, and I realized he wasn’t quite yet finished. I figured the hill had brought on the story, nothing more.

“I’m telling you all of this for a reason,” my dad said. “You don’t know it, but we come from a long line of ghosts. I want to tell you right now that whatever happens, I’ll always be around. I still talk to your granddad sometimes. Not just at his gravesite, but sometimes in my prayers. You should feel free to do that too, someday, with me. Don’t feel foolish. I ask him questions, and I get answers. Sometimes I do it because I miss him, and I know that he’ll be listening. I do it so he knows that I have not and won’t forget him. And I do it so he knows that somewhere he is still alive.”

Jason Skipper is the author of the novel Hustle, which was selected as a finalist for the PEN Center USA Award for Fiction. His work has appeared in Hotel Amerika and Mid-American Review, with awards and recognition from Zoetrope: All-Story, Glimmer Train, and Crab Orchard Review. He lives in Tacoma, Washington and teaches creative writing at Pacific Lutheran University.