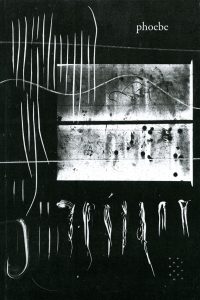 I am drawing your face from memory. Leaving spaces for the stones I’ve not classified, will not find. Granite striates the outcroppings at Half Dome, this is a decade past. Pillow basalt along the Coast Range of Jenner; where either of us might have been the one falling, while the other called it future, throwing pebbles. You are facing the violence of gesture that I record in even absolutely motionless gravel, which is fine grained and extrusive, and into which you will not be drawn. Every style of line I amass must be valued, or the reproduction will disappear. We call that embedding. Layers of bedded lava are glassy, almost translucent, due to rapid cooling, forced to the surface. This shard of rhyolite, milk-white with pink overtones, this flattery, and the negative space into which the flattery fails. Everything plays a part. Every fissure I draw, filled only with smoke, is the survival of some missed attention looking back emptily at the viewer.

Rusty Morrison’s poems were recently accepted by or have appeared in Colorado Review, Fence, Volt, Iowa Review, Kenyon Review, Lana Turner, and elsewhere. Her five books include After Urgency (Tupelo), which won The Dorset Prize & the true keeps calm biding its story (Ahsahta), which won the Sawtooth Prize, the Academy of American Poet’s James Laughlin Award, the Northern California Book Award, & the DiCastagnola Award from Poetry Society of America. Her most recent book, Beyond the Chainlink (Ahsahta), was a finalist for the NCIBA and also for the NCBA Awards in Poetry. She has been co-publisher of Omnidawn (www.omnidawn.com) since 2001. Her website www.rustymorrison.com.