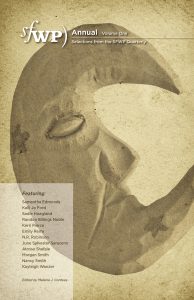 A choose-your-own-adventure essay titled “How to Be” by Samantha Edmonds winds its way through the inaugural issue of the SFWP Annual: Selections from the SFWP Quarterly, creating a backbone that the remainder of the anthology—a mixture of fiction and nonfiction—adheres itself to. Edmonds asks what it takes to be a writer and whether being one is something that writers can resist. The anthology begins with a page of “How to Be” at the end of which Edmonds shows a happy kid who enjoys to “scribble stories” rather than pay attention in church. The page ends with a choice: “To try something (good lord, anything) else, go to page 77” or “To be a writer, jump to page 41,” choices that Edmonds will present throughout the essay and anthology. On page 93, with two short stories left in the anthology, “How to Be” concludes and the reader realizes that no matter what everyone will end here: “There are no other options at this time. All you can do is keep writing.”

The decision to wind a choose-your-own-adventure essay through the anthology is satisfyingly meta. In an anthology filled with twelve writers, it would seem that each and every one of them would agree with Edmonds’s overall sentiment. Take Kayleigh Wanzer who plays with form in her numbered essay, “Thirteen Weeks.” Wanzer winds through the emotions she experiences when losing a love and then terminating an unwanted pregnancy, thus losing something else. The piece is heavily imagistic, palpable and evocative as Wanzer fights against her own voice and the voices of others, constantly telling her or insinuating how she could feel: “I can’t decide if his lips are something I want, and these are the things the doctors don’t tell me. The tenderness, the uncertainty of everything will continue.” I must say that, as the nonfiction editor for a feminist literary journal, So to Speak, I gravitate towards this essay. It is a piece that not only aligns itself with So to Speak’s mission, but one that I imagine helped Wanzer wade through her thoughts and emotions. In other words, when confronting the issues she faced, she had no choice other than to keep writing.

The first section of the anthology features five nonfiction essays, two of which are about mental institutions. These two essays on the same subject might seem like an overload, but as “Our Institutions” by N.R. Robinson is deeply personal and “A Member of the Family” by Morgan Smith is a profile of a mental institution in Mexico and its residents, they feel vastly different and equally compelling. In “Our Institutions,” N.R. Robinson struggles with the way his past self reacted to visiting his mother in a mental institution and how he currently feels about her. The power of the piece really comes on its last page when just as Robinson is about to leave his mother after visiting her in a mental institution for the first time, his mother seems to reference a nurse abusing patients. His past self chooses to do nothing, leaving both the reader and the narrator to wonder whether the mother spoke the truth and why nobody including himself interfered.

Morgan Smith’s “A Member of the Family” introduces the reader to a variety of characters that feel new and nuanced. One of the most compelling characters is Cholo, the first character the reader encounters in the essay. Smith describes him as “one of the more dangerous mental patients,” but he is also someone in charge of shaving all of the other patients: “Then Cholo leans forward and reaches through the bars with the razor. He’s shaving someone inside the cell; the clinking sound was him swishing the razor around in the water in the coffee can to clean it.” Like in Robinson’s “Our Institutions,” Smith introduces unique, complex and complicated characters that shape our understanding of the world. Together, these essays demonstrate the power of writing—how every writer’s voice can contribute something significant to an ongoing conversation larger than themselves.

Fiction, for its part, is as varied stylistically as it is in content. There were two short stories that especially drew me in. The first is Kerri Pierce’s “Better Than Six,” which evocatively captures the thirty minutes in which a woman sits in her car, trapped in a storm, unable to get to her father’s funeral. The story is divided up by the time, allowing the reader to watch the minutes tick by slowly—a direct contrast to the turmoil in the narrator’s head. The language is visceral: “10:12. The world seems suspended. The only thing moving is the traffic light up ahead. Despite standstill, it dutifully rotates through its signals: golight, green; slowlight: yellow; stoplight: red. Neither lane has moved in twelve minutes.”

The other is Emily Rems’s “Absolution Bakeshop.” In this piece, tourists in rural Pennsylvania wait in long lines to buy pastries from virgins in long, floral dresses. The story straddles straddles a dystopian line with allusions to Holy War, yet grapples with society’s obsession with purity and how it manifests: “The allure of the Bakers’ treats was that they were all handmade by virgins. The girls baked all day at home, carried each batch up the hill to the store while they were still warm, and then their parents sold whatever was on hand to whomever was next on the endless line that stretched day to night from their cabin’s front door down to the parking lot.” Among several other, these two pieces by Emily Rems and Kerri Pierce exemplify what Melanie J. Cordova praises in her letter from the editor: “the number of female voices in this anthology.”

Chosen from a range of pieces published in the SFWP Quarterly since 2015, readers can choose their own adventure through the diverse selection of literature in the SFWP Annual. This anthology contains a dozen different voices, each adding something new to the conversation that makes up its pages, each showcasing their love of words and their compulsion to keep writing.

Liesel Hamilton is the nonfiction editor of So to Speak: a feminist journal of language and art.  She is the co-author of Wild South Carolina, published through Hub City Press. Her work has also appeared in Fall Lines: a literary convergence, where she received the Broad River Prize for Prose, the collaborative chapbook Poetry on the COMET, and is forthcoming from Catapult. She is currently in the midst of a project exploring familial and cultural memory, for which she traveled through Germany through fellowships and grants from George Mason University and the Alan Cheuse International Writers Center.