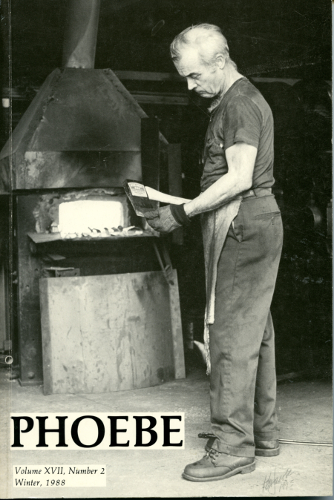 ____ ______ is the author of a number of other books, none of which you’ve probably read. This new novel you’re holding in your hands took him three years to complete, and it almost didn’t get published. Worse, it almost never got written. He thought of it first on a bitter night in the Vermont countryside. The town where he had moved after the small success of his previous book lay in a valley in the southwestern part of the state, a location that suffered all season from ferocious winds, though as far as snow went the valley didn’t receive as much as places just south over the Massachusetts line or just to the north in ski country. But that wind, the wind blew hard enough to take down utility poles and topple roadside billboards.

And the cold—it was cold, the cold outside, the way the wind drove the temperature down on howling January and February evenings, and the cold in his chest, he suffered from that too, not just the usual illness, the stuffed nose he’d had for weeks, but the icy sensation around his heart that lately occurred whenever his wife walked into the room: that cold. Just after his last book appeared she looked over at him from the other side of the fire, lay some manuscript pages in her lap, and told him that she thought that the magazine piece he had just finished (on the country’s leading fly-rod manufacturer whose shop and showroom lay a few miles up the road) was a piece of trash.

“You consider yourself a serious writer. Why do you write this crap?” The firelight gave her blonde hair an eerie glow, as if it were itself a flame.

“Because,” he said, “if you’ll take a moment to recall, we spent the advance on the book which I haven’t yet started to write on a second hand car because you were tired of having to make arrangements for yourself and the kids with only one car. So I’m writing this piece to pay our food for the next month because I spent the last of our money on last month’s food.”

“What’s that got to do with the car?” she said, staring into the fire.

“I spent the advance which should have gone for our food for the year on your car.”

Jimbo their younger son (named after his late father) came toddling into the room.

“I’ll get to it,” the novelist said, desperate to leave the room.

“Don’t bother,” his wife said. “You might start a new novel in this next minute. I want you to be near your machine when the spirit comes upon you.”

“I won’t forget that,” she said, taking their child by the hand and leading him from the room.

This happens in Vermont in winter, the writer said to himself. When spring comes all will be well, and all manner of things will be well: grass will come back, bulbs will sprout, the first green of nature will turn the tree line to gold as the new leaves peep out. And if I sit down at my machine now and work I will have many pages by then. So he went to his desk, placed a blank page in the machine, and stared at it a while. He was staring again at the same page the next morning, after a series of terrible fire-fights with his wife. By dawn she told him that she had had it, but he ignored her. By midmorning he was still staring at the same blank page while sounds of disruption came from other parts of the house.

“Give me your credit card,” his wife said, coming into the room wearing a dress he hadn’t seen on her since last spring.

“Yes. Give me your—our—credit card, please.”

He handed over the card. She left the room, came back with Jimbo and Michael, his brother older by a year, both of whom wore their parkas.

“Say goodbye to daddy,” she said.

It was way past lunch when he began to wonder where they had gone. He worked a while longer. When it started to get dark he took up a stand near the window overlooking the drive, watching until the field of snow before the house faded to a strange winter grey.

The telephone rang and he rushed to answer it.

“Hey!” It was an old friend who worked as a financial planner in New York. “You guys want to come down to the city for a fiesta? We’ve got lots of things planned.”

“When you-know-who comes back from town, I’ll ask her,” the writer said. They talked a while longer; he complained about his wife, his friend listened and then told him that things would probably look better if they came down for the weekend.

Almost immediately after he replaced the telephone on the receiver it rang again.

“You were talking,” his wife said.

He told her about the call from New York.

“Well…” she said, an odd note attached to her voice. “Do you have an extra key to the car?”

“Can you wait a minute and let me finish? Now listen. The car is at the airport short-term parking area—”

“Albany, of course,” she said. “Where else would I leave from?”

He normally had a drink before dinner. This night he drank instead of eating. In the morning he felt awful, cramped and with a headache in his empty bed. But he went to the machine and picked up that same sheet of paper. A spider slid down the front of it and the man thought, a spider must mean that spring can’t be all that far away. He thought of where his boys were, and how it might be nice visiting them there, in the warm part of the country where he had met their mother one night at a reception following a lecture he had given to a conglomeration of regional book discussion clubs about his only nonfiction work, a biography of a hero of the first world war who happened to have been born and raised in that southern county.

“Ciao, Mama,” she said to the older woman, who left with most of the rest of the club members when the punch ran out. “So,” this girl said, turning magnetic eyes on him, “y’all want to see some of our fair city under the cover of night?”

A few months later he brought her home to meet his father, a widower of many years who was still faithful to his long-lost wife. A cleaning lady came once a week to his apartment in the large mid-Atlantic city where he still kept up his law practice, and she was the only woman who crossed his threshold before the writer brought home his bride-to-be.

“Are you sure you know what you’re doing?” father asked son while young blonde had gone off to the bathroom.

“I’m sure,” said ____ ______, knowing that his father was thinking of the last time he had said that, when he had brought him the girl he had met in his Chaucer class at the state university where he had first discovered that he might have some talent for writing. That marriage had lasted less than two years.

Her name was as same as a month. Not April, not June. But May! May!

“She’s so darling,” his mother had said, taking May around in her arms and setting her to work preparing the Thanksgiving meal.

“She’s pretty,” his father said, watching as she came out of the kitchen carrying a tray of vegetables to the holiday table. Despite his parents all-embracing love, the writer had been a lonely child, and he remembered few holidays as pleasant as this.

The Fourth of July, 1960, stood out above them all, because he had just turned fifteen and his parents had taken him to the Outer Banks. He had seen a pickup truck full of black kids heading for the beach and later noticed them setting up fireworks. He walked over to where they had made a little encampment, and one of the boys had offered him a beer, and someone had a battery-powered radio, and a few other white kids drifted over, too, and at first he thought that there was going to be a brawl, but it turned out another way, for once, the fireworks, beer after beer, dancing on the sand to the radio rhythm-and-blues—and a white girl his age in a tank-top and cut-off jeans plucked him from where he stood near the fire and took him over behind the dunes.

How he loved that beach! He’d been coming here with his parents for years and years, rushing off, as soon as they arrived, in the direction of the surf, craning his neck at the swooping, calling sea-birds, waves lapping his ankles. His father helped to catch sand crabs, the kind that tickled your palm when you held them.

Best of all, he liked to build sandcastles, he liked to dig in the sand, watching the foamy salt-water gush in to fill the holes.

At night in the beach house his mother leaned over him, her long dark salty hair, tangled from the wind, falling toward his face.

“Good night, little darlin,” she whispered, her voice like the wind.

“Honey?” his father called from the other room.

Before sailing into the dark, he heard through the thin walls the talk between them:

“I remember…the sun hadn’t yet gone down, Jim, you hawk, you girl-hawk…”

In his lifetime, acclaimed author Alan Cheuse, National Public Radio’s longtime book commentator, produced five novels, the last of which was Prayers for the Living, as well as five collections of short stories and novellas, the memoir Fall Out of Heaven, and A Trance After Breakfast, a collection of travel essays.

For more than three decades Cheuse was a regular contributor to National Public Radio’s All Things Considered. His short fiction appeared in The New Yorker, Ploughshares, The Antioch Review, Prairie Schooner, New Letters, The Idaho Review, and The Southern Review, among other places. He taught in the Writing Program at George Mason University and the Squaw Valley Community of Writers.