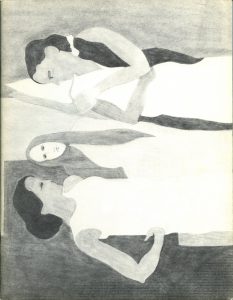 the way he handled that thing:
you would’ve sworn
that birth had brought him in with the wheel in his hands
the year was ‘66

George Mosby, Jr.’s work appeared in phoebe multiple times in the 70s, 80s, and 90s. Unfortunately, little biographical information on George is found in these issues. From our 1979, 8.2 issue, we see that in addition to phoebe his work appeared in Images, Hanging Loose, The Unicorn, Northwoods Journal, and Vega. In 1978, he won 3rd place in the Wayside Quarterly Poetry Award.

In 1990, phoebe reached out to Mosby’s wife, Judith Ann Mosby. Her response to this request was published in our 20.1&2 issue from 1990. Among other details, she wrote that Mosby was born in 1950. At the age of three, his father, a Korean War veteran, was found hanged in an apple tree in their yard. It is not known whether it was a murder or suicide.

Mosby grew up in poverty, and spent time in the James River Correctional Center where he married Judith Ann in 1982. The following year, upon his parole, they had a daughter.

She closes the letter with this:

“George rests in the backyard of his grandparents, beside his grandmother’s grave. He died of what the medical examiner called an accidental overdose of diphenhydramine, a cough syrup. He was alone at the time of his death and his family is left with doubts as to whether it was an accident, a suicide or a murder.”

Earlier in the letter Judith Ann wrote that, “The poems will have to speak for themselves. I believe there is an underlying concern in George’s work to return to a more peaceful time than the one that surrounded him as an adult.”